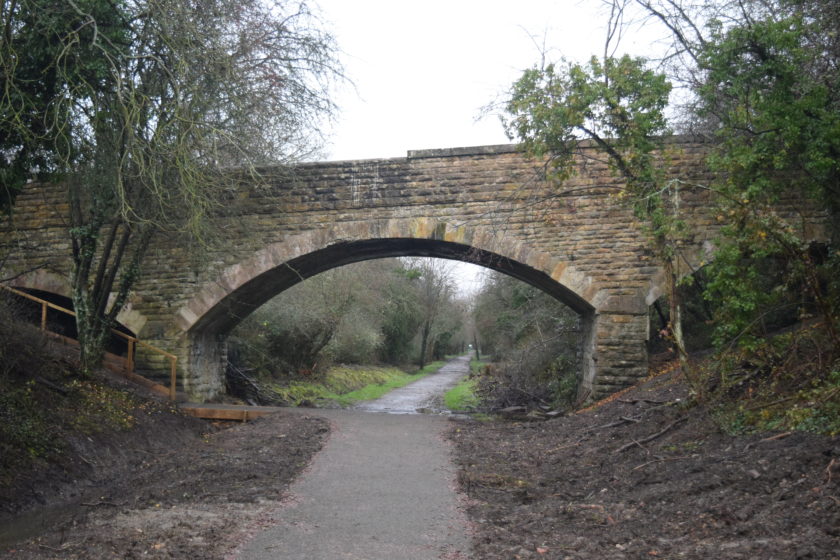 Nowadays totally devoid of any railway links, the Northamptonshire town of Brackley once had two stations on competing companies’ lines. The map below shows the historic arrangement, with the London North Western Railway (later LMS) Banbury-Buckingham rural branch line crossing from west to east and the Great Central Railway (later LNER) main line crossing from north to south on its way from Manchester to London.

The LNWR line was the original railway in the town, arriving in 1850. Services ran west to the LNWR terminus at Banbury, via a single stop at Farthinghoe, and east to Buckingham, where services sometimes continued to Verney Junction and Bletchley.

The line was one of the first to be experimentally operated with diesel multiple units in the 1950s, but this was not enough to save the dwindling rural service, which closed to passengers west of Buckingham in 1960 (the Buckingham-Verney section following in 1964).

Today the section of line west of Brackley high street has become a walking and cycling route, allowing it to be walked for a short distance up to the former Banbury Road bridge, where a new junction with the A422 bypass has cut off the route. East of the high street the formation has been mostly built over, including the station site, although an original goods shed still remains.

1899 saw the opening of the town’s second station when the Great Central’s “London Extension” arrived. Suddenly the LNWR’s fairly meager service was complimented by a direct route south to Aylesbury and London and north to Rugby, Leicester, Nottingham and Sheffield. For the next 57 years Brackley became a node on one of Britain’s key main lines, until, in 1966, the GCR became the only true main line in Britain to be closed. The section south of Aylesbury survives in passenger use to this day, with the section north from there to the junction with the LNWR Oxford-Bletchley route due to be reopened by 2022. Some of the formation north of there towards Brackley may be re-used by HS2, but that is planned to bypass the town to the west.

Brackley Central station was different from standard GCR island platform stations in that the main building was located to the side of the station, rather than above or below the main platform on a bridge as was normal. A footbridge extended from the building across the down line to the single platform. Today the building survives as a car workshop, and at the time of visiting in December 2018 some clearance work was taking place on the old station site.

Sadly the footbridge and the station itself are completely gone, with industrial development and the A43 dual carriageway severing the line. Immediately to the north a new housing development has turned part of the alignment into a walkable linear park, although no evidence of its railway heritage remains.

Today Brackley relies entirely on local bus services for public transport, and even those are dwindling. Stagecoach run service 500 to Banbury, by far the busiest route out of the town. They also formerly ran the 8 to Northampton, which once ran through to Bicester and Oxford but now only makes it as far as Silverstone.

The new developer-funded route X91 provides a direct link to Milton Keynes via Towcester. There is also a subsidised route to Buckingham, the 132, run by Redline. These services between them roughly re-create the Banbury-Buckingham route, along with the new Milton Keynes service, but the direct north-south connections are a distant memory, and today Brackley finds itself without even a connection to its county town.