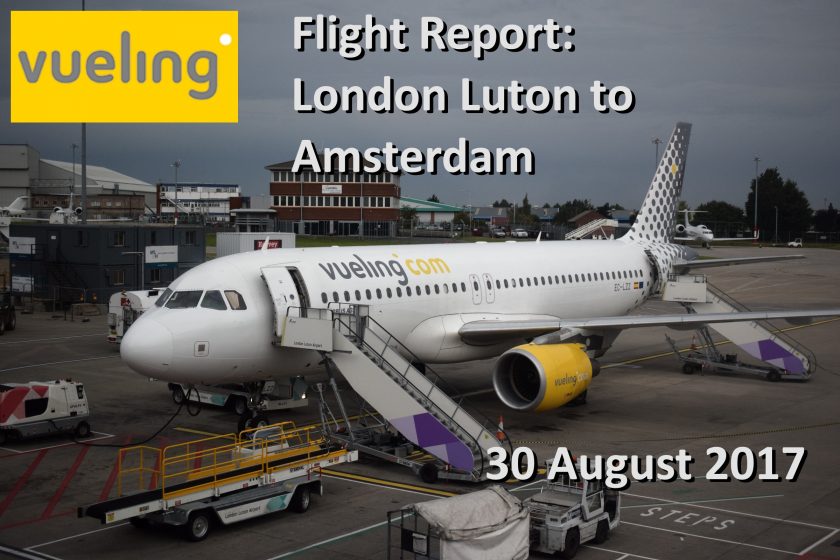 London Luton is arguably Britain’s worst airport. Although in the midst of a rebuild, its cramped lounges and standing-only departure gates have been a defining feature for some time and don’t look set to change. As such it’s a place that tends to get flights off to a bad start before they’ve even begun, and this case was no exception.

Vueling style themselves as a budget airline, although the IAG-owned carrier’s fares in my experience don’t compete well with those of other budget carriers. In this case a £75 return fare (plus extras) was charged for a route I’ve done for half that with EasyJet before now. On board the aircraft was hot and stuffy; the on-board air supply wasn’t turned on until 25 minutes after we boarded, leading to a very hot cabin environment.

The flight itself was half an hour late, but this wasn’t the airline’s fault and was down to weather restrictions at Schipol. However the on-board experience was distinctly lacking. The in-flight service was dropped for time reasons, even though other airlines manage it on the same route. Announcements were delivered first in Spanish then in English. Although Vueling are a Spanish airline, this is downright bizarre on a UK-Netherlands route where English and Dutch should be the languages used, with Spanish third if used at all. Only one Dutch announcement was provided on the outbound flight (during landing) and none on the return leg.

Curiously the Vueling safety card included a ‘no video cameras’ symbol, although the flight crew agreed with my assessment that my handheld video camera constituted a ‘portable electronic device’ and was fine. I have contacted the airline asking for this to be changed.

I’ve decided to review the outbound flight because that’s the one I filmed, however this article wouldn’t be complete without mentioning the two-hour delay to the return leg. This was mainly down to weather, but the complete lack of information updates, support from staff or apologies on board was astonishing. Naturally when the airline emailed me asking for my feedback, I wasn’t in a mood to hold back.

I’m not a critical flier by any means and will give a lot of often-derided airlines, including the likes of Ryanair and WizzAir, great feedback and strong recommendations based on my good experiences with them. Vueling joins an elite club of airlines I have been truly shocked and appalled by, a category they share only with Air Canada.

I’m not going to advise against ever flying with Vueling based on one experience, and it’s quite possible other passengers on other routes will report much better experiences. But next time I feel like visiting Amsterdam, this certainly won’t be my route of first choice.

You can see the full photo gallery from this trip here.