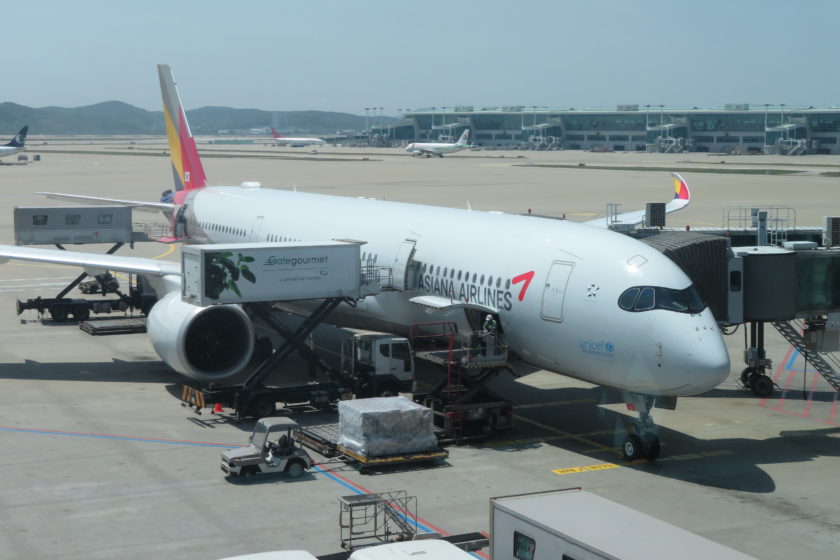 For my trip to Tokyo at the start of May I flew with Asiana Airlines via Seoul, taking the opportunity to sample their new Airbus A350 aircraft.

The A350 itself is a remarkably smooth flying machine. Take-off and landing were the quietest, smoothest and most gentle I’ve had on any aircraft, including the Boeing 787, and even when turbulence was encountered the A350 seemed remarkably adept at dealing with it. A direct comparison with the 777 on the Seoul-Tokyo leg the next day was very telling, with the 777 being considerably louder and with a much rougher ride from the get-go.

The flight was only around half full in both directions, which seems surprising for a route linking two major world capitals. Perhaps the fact that Korean Air and British Airways also fly the route, meaning all three airline alliances have a direct flight each, has somewhat crowded out the market on this particular city pair. The A350’s large capacity may be too much for the demand Asiana actually experiences on this route, but time will tell if it will win over more custom.

Asiana’s interior design doesn’t do the A350’s modern sleek appearance any favours. The seat moquette looks like something out of the 1970s, which was decidedly out of place on such a new aircraft. An interior colour scheme that more appropriately matches Asiana’s striking external livery would be a welcome change, as this one seems much more in tune with their previous corporate colour scheme.

The in-flight meals and general service were unquestionably excellent, with the attentive and polite at-seat service which is typical of east Asian airlines. A special meal request for the vegetarian option (one of a range offered) a few days before the flight was honoured in full, with two main meals and a mid-flight snack in both directions, along with numerous drink visits. The vegetarian options were varied and interesting, which is good to see from an airline based in a country where vegetarianism is still relatively uncommon.

The in-flight entertainment options, sadly, left a lot more to be desired. A limited selection of new and classic films is perhaps understandable, given that a section of the library is given over to local Korean cinema, but the range of TV and music was also very limited. Furthermore, the IFE games like Sudoku weren’t working at all on the return leg of the flight.

Timekeeping was less than stellar, with delays between 30 minutes and 1 hour in both directions, although the delay coming home was down to a late passenger and these things are usually beyond the airline’s control.

All in all, for a £600 round trip from London to Tokyo, including a night in Seoul, Asiana were a good value option. The A350 is an excellent aircraft without doubt and Asiana are a good customer-focused carrier, albeit with a few relatively minor issues to resolve.

A full photo gallery from the flights is here:
https://mkttransportphoto.smugmug.com/2019/May-2019/Aviation-May-2019