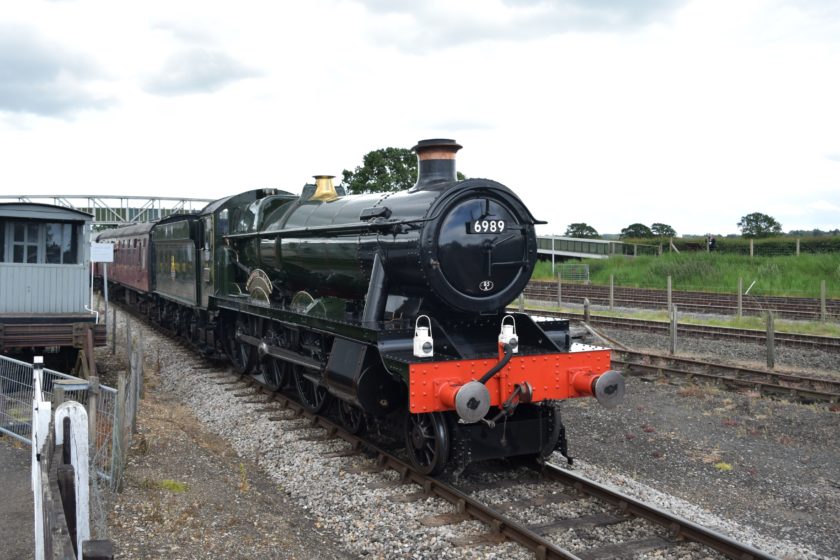 Without doubt the star of the Buckinghamshire Railway Centre’s May 2019 steam gala was the newly restored GWR Modified Hall no. 6959 “Wightwick Hall”. The locomotive has just emerged from a 32-year long restoration after being one of the final steam locos to be rescued from Barry’s Scrapyard in the late 1970s. Wightwick Hall moved under its own power for the first time since its withdrawal in 1964 earlier this year, and now the loco is being gradually run in on event days at the BRC in readiness for going out on hire in the coming years.

To describe the loco as looking magnificent would be an understatement. The transformation achieved by the hard working volunteers at the 6989 Restoration Group is nothing short of extraordinary, taking the rusted hulk and painstakingly restoring it into a fully operational locomotive. The engine glistens and shines even on a cloudy day, and despite only being two months out of its 55-year slumber, you can feel the power of the loco as it begs to be let loose on a longer, faster line.

That said, the short demonstration line at Quainton is actually the perfect place for a loco like this to be right now. It provides an opportunity for the public to see and experience the loco in action and for the volunteers to test it in operation without putting it under much stress and in a safe and contained environment.

The BRC steam gala, which took place over the late May bank holiday weekend, also featured another GWR loco in the form of 9400 Class pannier tank no. 9466, an example of the long-boilered variety of the classic GWR pannier design that would be the last development of that family.

Over on the ‘down’ side of the site the other demonstration line (which runs from the former Brill branch platform) was the preserve of industrial locos, Hudswell Clarke 0-4-0 saddle tank no. 1742 “Millom” sharing duties with Bagnall 0-4-0 saddle tank no. 2469 “Scott”, the latter making a rare appearance in passenger service. Millom was hauling three of the BRC’s classic pre-grouping carriages, a mix of GCR, LC&DR and GNR examples. A host of other fascinating pre-grouping coaching stock can be found inside the centre’s down side shed.

A photo gallery from the gala is here.

The steam gala also doubled as a small bus rally, photos of which are also here, including several Routemasters, an RT, two MCW classics (Metrobus and Metropolitan), an ECW Olympian, and more.

Lastly, a short video filmed at the gala shows both demonstration lines in operation: