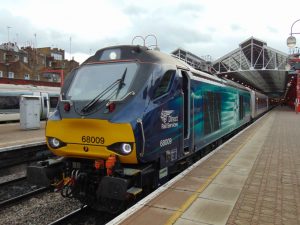 As a thank you for using the Oxford Parkway line on its first day, Chiltern Railways decided to give me a free weekend travel pass. Three months later the opportunity to make use of it finally presented itself, resulting in this trip along the full length of the Chiltern Main Line.

The full photo gallery from this trip is here, whilst some video shot during the trip is here. 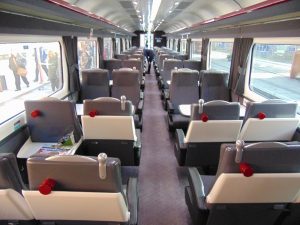 After a brisk Virgin Pendolino ride down to London Euston followed by a less brisk walk to Marylebone, the core of the trip started with a non-stop ride from London to Birmingham behind DRS liveried Class 68 no. 68009 ‘Titan’. Although I have used Chiltern’s loco-hauled services before, this was my first time behind a Class 68, and my first time riding the entire London-Birmingham route. The 68s are unusual for modern traction in possessing a very powerful engine sound, and sitting in the first carriage behind one allows the beating throb of the loco to give the journey an extra layer of ambiance. 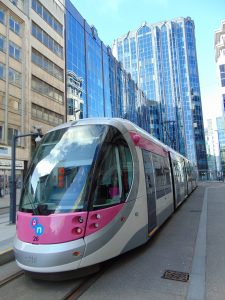 It’s difficult to overstate the comfort of Chiltern’s Mark III carriages, and that combined with the smoothness and style of locomotive-hauled travel more than makes up for the limited speed on some parts of the route. The train never exceeds 100mph, but that helps in a way to recreate the feel of the loco-hauled intercity services of the 1990s, and does allow one to appreciate the beautiful Chiltern scenery. It’s also interesting to reflect on riding a 100mph loco-hauled intercity service on a line that a few decades ago only had one train every two hours to Banbury, formed of a Class 115 DMU.

After arriving into Birmingham Moor Street and enjoying the restored GWR station, I walked over to Bull Street for a second look at the newly opened Midland Metro stop there (having previously visited a few weeks before on my Chasewater trip). After seeing that and getting a few bus photos, I returned to Moor Street for the journey back to Marylebone, this time taking in a couple of intermediate stops. 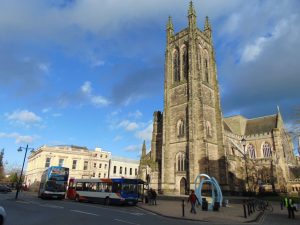 The first of these stops was at Leamington Spa, for a brief look around this beautiful town. Although it’s somewhere I’ve visited a few times before, the continental feel of the imposing buildings along the dead straight high street, built as it is on a grid pattern, never ceases to impress me.

The final stop was at Bicester, where I had just enough time before sunset to check up on the new Bicester Village station. Sadly there were no conveniently timed trains back from there, so it was back to Bicester North for a local stopper down to Marylebone.